Digital audio processing for the Kenwood 870

...A useful scheme for software-based  transmit audio processing for the Kenwood TS-870S.

As noted elsewhere on this website, digital audio processing handling in newer transceivers such as the Kenwood TS-590 is relatively easy to implement due to the presence of a digital audio path between the transceiver and a PC.   Accomplishing these techniques with older transceivers such as the Kenwood TS-870S, although doable, is somewhat more problematic.  Nonetheless, the advantages justify doing so.   This article was created to share setup information and lessons learned and in intended for other hams who are considering this approach as an effective alternative to hardware-based external transmit audio processing.

Digital audio from the Rode microphone is routed to a Windows 10 PC via a type AB USB cable.

Processed digital audio is converted to analog and routed from the software back to the microphone via the USB cable.

Processed analog audio is routed from the microphone via 3.5mm cable to the front panel of the Kenwood 870's microphone connector.

Processed analog audio is thence transmitted by the 870, amplified by the AL-80B and routed to the balanced line tuner thence onward to the antenna.

Received analog audio is routed from the 870 directly to a pair of Behringer MS40 near-field studio monitor speakers.

Note: Hams who prefer not to invest in a USB microphone may want to consider using their favorite conventional microphone together with an external USB audio interface such as the Focusrite Scarlett Solo.  This device inputs your mic output audio into the front panel XLR connector thence routed as digital audio to your software-based processing system via a USB cable.   Processed audio is then routed from the PC back to the interface via the same USB cable, thence converted back to analog audio before being outputted to the rear panel left and right channel RCA jacks which are connected to the microphone input connector on the front of the 870 via a splitter patch Y Cable - 1 XLR Male to 2 RCA Male such as the one described HERE. 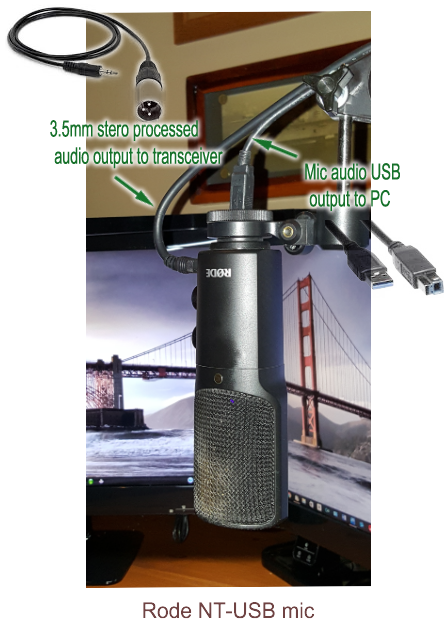 The NT-USB is ideally suited for recording musical performances in addition to spoken word applications such as podcasting, voice-overs, and amateur radio.

The microphone is fully compatible with all mainstream recording applications on both Windows and Mac OS based computers, as well as the Apple iPad using RODE Rec, GarageBand, or any other recording app that accepts an external microphone.

For zero-latency, there is a 3.5mm jack on the front of the microphone where you can attach headphones to monitor the output of the microphone or the output of your software-based processing system.  More importantly, and for purposes of this article, connect a 3.5mm cable to this jack with a male TRS plug on one end and a male XLR plug on the other end such as the cable described at https://www.bhphotovideo.com/c/product/691059-REG/Hosa_Technology_XVM_101M_XVM_101M_Angled_3_5mm_to.html.

Two adjustable control knobs are located on the front of the microphone.  One knob selects either unprocessed audio direct from the microphone.   The other knob adjusts the level of processed audio coming from the output of the software-based processing system.  This control, together with windows sound manager level adjustment and the processing software's adjustments must be fined tuned in unison to provide the faithful and clean audio input to the 870.  Additional setup information and tips are provided below.

(2)  Download and install the demo version of Breakaway Live from http://www.claessonedwards.com/index.php?option=com_content&view=article&id=95.

VOX is set to on as described in the operator’s manual.  Microphone gain initially set at about 8:30 knob position. The speech processor and TX EQ are both off as the audio processing software system incorporates superior EQ and compression.  Menu 29 is set to 3000 and menu 30 to 100. 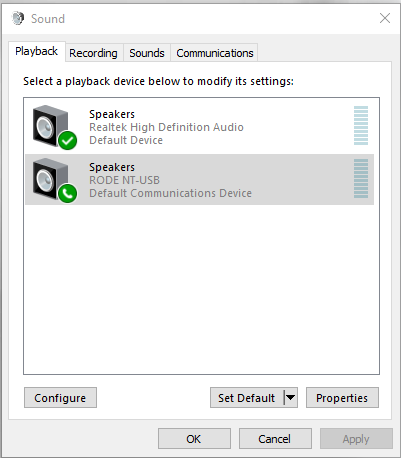 Note:  This important device controls the level of processed audio going to the 870 for transmission.   To reiterate, there are two adjustable control knobs are located on the front of the microphone.  One knob selects either unprocessed audio direct from the microphone.   The other knob adjusts the level of processed audio coming from the output of the software-based processing system.  This control, together with windows sound manager Speakers Rode NT-USB level adjustment and the processing software's adjustments must be fined tuned in unison to provide the faithful and clean audio input to the 870. 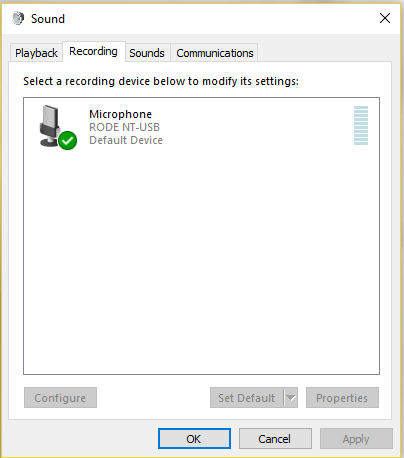 > Microphone Rode NT-USB is set as Default Device.  Properties set at level 24, 16 bit, 48000Hz and no exclusive mode.  Close-talk (about 2 inches) the microphone to alleviate pickup of shack noise.

2.  Breakaway One as described at http://www.breakawayone.com/breakaway-one/.  When first installed, configuration settings will need to be established.   Be sure to activate the "ASIO".  Provided all your settings are compatible, you should now be viewing the main screen similar to the one shown in the below screenshot: 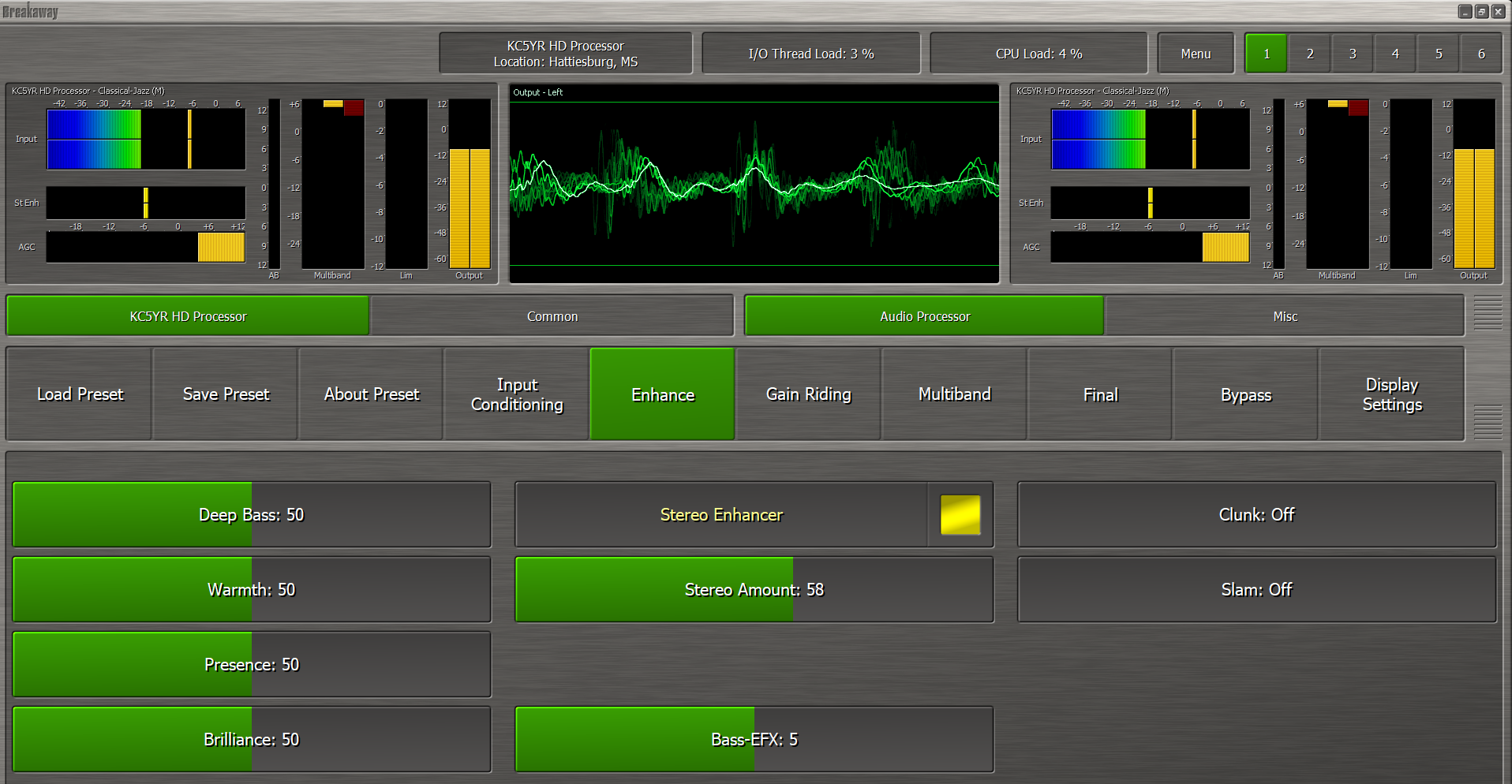 3.  Hams wanting greater latitude in processing choices may want to consider "Reaper" as described at https://www.reaper.fm/.  Reaper is K4QKY's favorite alternative to Studio One 4.

K4QKY expects that you will enjoy learning how to use and optimize this somewhat different approach to amateur radio transmit audio processing!    Email don@k4qky.com or call 618-524-7590 with questions, comments or suggestions on how to make this article more useful.